“What would you do if you,
knew all of the things we knew
would you stand up for truth
…or would you turn and walk away”
– Paris (hip hop artist)

“I first began thinking about this project in March 2003 before the invasion of Iraq as millions marched in streets around the world, the largest pre-war demonstrations ever recorded. My mother and I were talking about the protest movements of the 1960’s and the songs that inspired her generation. She boldly stated that there was no protest music anymore despite the growing need today. I couldn’t accept this statement. To surrender like that would be to accept that generations since the counter-culture had grown apathetic and unconcerned with the state of the world. The demonstrations of millions in villages, towns, and cities around the world at that very moment meant this simply was not true. And so I set out on a very personal quest to not only find the Dylans, the Lennons and Woody Guthries of my generation but to find out why their voices did not sing loud enough for people like my mother to hear.”

Sounds Like a Revolution is a feature documentary about a whole new generation of activists musicians who are living proof that music is an important and powerful tool in the on going struggle for social change. Focusing on the personal experiences of four independent musicians, we come to understand their motivations and their struggles as they face a post-9/11 environment where dissent is silenced and media outlets either ignore or self-censor material before it’s released.

This film is the journey of Michael Franti, Fat Mike, Paris, and Anti-Flag who started their careers when corporate consolidation in the music industry began to make it virtually impossible for political artists to be heard in the mainstream. But these four artists became pioneers, setting an example for many to follow as they were forced to invent new and unique ways to sidestep and breakthrough every attempt to censor them. Through their music and message they have “enraged, enlightened and inspired” a whole new generation of activists around the world.

A collection of live performances, political rallies, music videos and uncensored commentaries from some of the most outspoken icons in the business – folk legend Pete Seeger, The Dixie Chicks, David Crosby, Steve Earle, Jello Biafra, Ani DiFranco, Wayne Kramer (MC5), Tom Morello (Rage Against the Machine) and more. Sounds Like a Revolution offers a unique historical perspective behind the new wave of protest music sweeping America.

With exclusive footage, the film follows Michael Franti from Baghdad to San Francisco as he challenges corporate media with his radical message, POWER TO THE PEACEFUL. From apathy to activism the film profiles NOFX lead singer Fat Mike as he converts his ‘apathetic’ fan base into the first punkrock lobby force. From the concert mosh pit to Congress, the film follows Anti-Flag as they take on the US Army’s predatory recruiting practices; while Paris takes us into his revolutionary cyberworld of social activism.

Sounds Like a Revolution is a testament to the power of indie artists everywhere who are committed to expressing dissent and telling the truth as they see it, whatever the consequences. 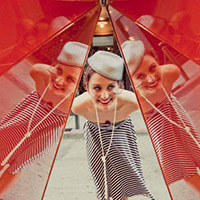 SUMMER LOVE
DIRECTOR / PRODUCER A documentary filmmaker, director and the creator of Deltatime Productions, Summer gained a foothold in film as a documentary researcher and producer. Her unconventional style helped secure her place as Canada’s “it” girl for fresh, edgy pop culture as she went on to produce several short documentaries showcasing up-and-coming Canadian fashion designers and musicians – a series that was broadcast internationally on the German public television station, WDR. Seven years in the making, Summer’s first feature documentary, Sounds Like a Revolution, marries her commitment to social justice and passion for music and politics. This award-winning, pro-active and energizing film launched theatrically to critical acclaim during the G-20 Summit in Toronto Canada Spring 2010 and has been burning up the festival circuit ever since.

Among other projects, Summer is currently in development on another theatrical documentary feature investigating the controversial life and musical legacy of the original Gangster of Love: Johnny “Guitar” Watson.

Jane’s documentary career started with a serendipitous encounter with Sounds Like a Revolution’s director Summer Love.  Together they created Deltatime Productions and embarked on an adventure of a lifetime. Jane is currently producing and directing web series for conservation and non-profit organizations.